Article From Wired, an interview with Sean Carroll Dated 02/26/2010 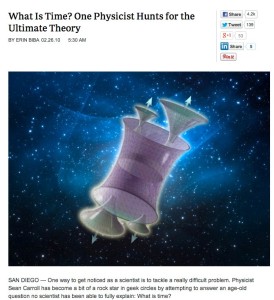 Sean Carroll is a theoretical physicist at Caltech where he focuses on theories of cosmology, field theory and gravitation by studying the evolution of the universe. Carroll’s latest book, From Eternity to Here: The Quest for the Ultimate Theory of Time, is an attempt to bring his theory of time and the universe to physicists and nonphysicists alike.

So the universe is one of many snowballs rolling down a mountain cliff. Each snowball being its own universe, with its own laws of physics. Time is what allows the snowball to roll downhill, growing and expanding as it rolls towards[...]. Measuring the amount of growth in this snowball is how we can measure the characteristics of time. When this snowball reaches [...], an anomaly occurs and another snowball, or many snowballs are created. So this river of time and creation is forked, creating even more rivers. He says that we probably can’t go back in time… probably.

I feel like he’s tactfully saying all life, and all creation could not have came from a single source, but it had to start in some way.

He’s using the microcosm of a particle with a half life, and the correlating characteristics of spontaneous particle creation, to describe how these multiverses are conceived. I believe a more accurate microcosm would be the conception of life – the human body has 100 trillion cells. All of these cells work in tandem to create different functions, that work together to create different organs, which work together to keep all the biology tick tocking like a clock. Throw in some consciousness, and you have life.

I believe comparing a galaxy to a human body, and a universe to a human society would be more accurate. There are different universes with different laws of physics, just as there are different human societies with their own moral codes and ethics. So what would time be in that analogy? Sean Carroll says Entrophy is equivalent to time. The more disorderly something becomes is directly proportional to time – and specifically time moving forward. Because nothing in the universe moves forward into order, only disorder, you can never go back in time, only forward. But, human societies rise and fall, and history repeats itself over and over again. I believe time repeats itself, and creates loops, while moving forward at the same time just as humanity does. But ultimately, you cannot have time without celestial objects bumping and grinding with each other, and they bump and grind with each other in loops while expanding outward towards [...]. Maybe [...] is when one heavenly system collides with another, or a star goes super nova….