A continuation of An Unbiased Account of Humanity’s Origins: 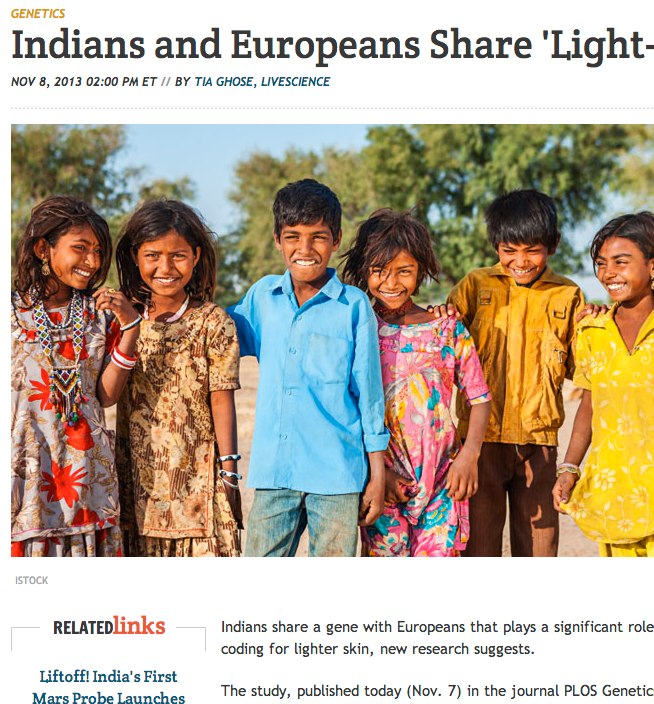 From the article at Discovery News:

Basu Mallick and her colleagues took skin color measurements for about 1,228 individuals in Southern India. The researchers then conducted a genetic analysis and found that about 27 percent of the skin color variation was due to a variation in a skin pigmentation gene. Called SLC24A5, this gene code for lighter skin is present in almost 100 percent of Europeans.

The team also examined the gene in 95 people around the subcontinent and found that both South Asian and European populations inherited this particular variant from a common ancestor who lived sometime between 22,000 and 28,000 years ago.

“We don’t know the origin of this mutation. We just know that they have a common ancestor,” Basu Mallick told LiveScience, referring to both South Asians and Europeans.

Based on the genetic markings appearing in the genes of Europeans today, it has been documented that human migration from Africa to Europe occurred more than 30,000 years ago.  Then a mutation occurred that yielded lighter skin in all those in Europe, and a percentage of those in India.  Maybe that’s what began the horrid caste system there – dark skinned and light skinned modern humans clashed and absorbed each other there to claim territory and fertile lands?  The origins of racism is a topic that greatly interests me, and will be explored in future articles.

From there, Modern Humans are estimated to arrive in America about 30,000 years ago, which contradicts everything I was taught in school.  If it was 30,000 years ago, these inhabitants would have been dark-skinned, spreading throughout the Americas.

From the article at Discovery News:

Historians commonly believe that humans first crossed to the Americans from Asia 12,000 years ago. But a new exhibit in Brazil features artifacts dating back as far as 30,000 years ago, 18,000 years earlier than previously believed.

We are living in an amazing day and age when truth has been consistently bubbling to the top of this glass of science.  It truly is exciting.