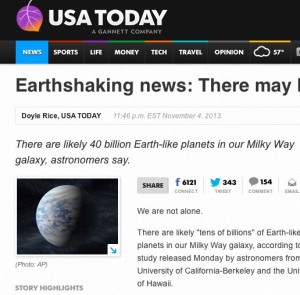 Epic! An estimate of 40 billion planets have been found like our Earth, and that’s just within the milky way galaxy!  Holy… Um, this is much bigger news than the tone of this USA TODAY article is perpetrating. The media will sensationalize violence, sex, drugs, war, racism, etc. But, finding other Earth’s?  Yea that information is belittled…  A mere decade ago, the sentiment from NASA is that we are on the only planet with our unique characteristics and we are the only Earth. Yet, today we know for a fact that the nearest Earth-like planet is 72 trillion miles away!

72?  72 is a remarkable number found in the lore of many ancient civilizations. For example, our Earth wobbles 1 degree on its axis every 72 years. There’s a lot of math in life — a foot approximates to a measurement found in Egypt (later screwed up by big government), 72 trillion miles is significant!  I recommend reading The Synchronicity Key from David Wilcock. 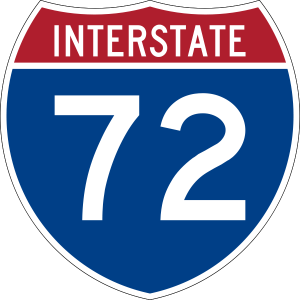 More information about 72 (In Religions) from Wikipedia:

Do we really need more evidence at this point… life can form spontaneously in nuclear reactors, near underwater lava ducts, pretty much anywhere. The vacuum known as space transports frozen bacteria that spews as the waste material of stars, and fertilizes the eggs (Earths) — then DNA is massaged, the info about how things grow is radiated intelligently within lightwaves. All you need is a star and an earth, and you are guaranteed life. To bad that will get hand fed to us over the next 50 years.