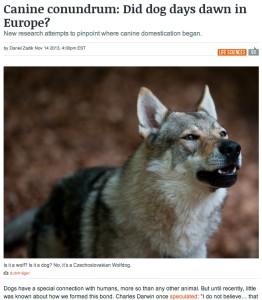 Dogs were prevalent 36,000 years ago, before the advent of farming. Most likely they originated near Europe. While Neanderthals were swapping genes with modern humans between 37,000 and 86,000 (See An Unbiased Account of Humanity’s Origins). It is probable that those modern humans, as the ice age was receding, migrated north becoming the dominant predator in those regions, and nurtured the pups that were the most docile. The dominance of certain genetic mutations that occurred in humans also occurred in our canine counterparts. But it doesn’t explain how and why domestication occurs…

How can you domesticate the “wild” out of a “wild animal” ? Does this imply that ALL animals can become domesticated?  I’m reminded of the Garden of Eden, a time when man and animal were supposedly in a state of peace.  Basically, you would collect a wild animal, and breed the pups that had docile tendencies.  On top of that, it is doable to domesticate a feral animal, just have plenty of food available.  However, as soon as you take away the food, the animal can easily revert back to a feral mentality.

It’s frightening to think that all the progress humanity has made thus far can be instantly negated in a blink of an eye, as easily as a pig reverting back to a wild boar.